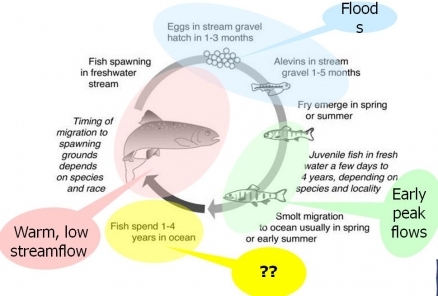 Provenance: Eli Maynard
Reuse: This item is offered under a Creative Commons Attribution-NonCommercial-ShareAlike license http://creativecommons.org/licenses/by-nc-sa/3.0/ You may reuse this item for non-commercial purposes as long as you provide attribution and offer any derivative works under a similar license.

This is a clicker case is the second of a two-part series that is an introduction to potential impacts of Global Climate change on the of the Tribal Lands in Washington State.

It specifically explains the changes in the life cycle of the salmon. Salmon have been integral part of the Native American people in the region for thousands of years. The Northwest Indian Fisheries Commission (NWIFC) has played a huge role in the analysis of data, along with the restoration and building of habitat for the salmon. They have also taken a leading role in restoration projects throughout the Salish Sea. This case study also discusses the massive degradation of salmon habit and steps being taken to restore salmon habitat and aid the salmon through all steps of their life cycle. The case study explains effects of Global Climate changes on salmon including, the rise in air and water temperature, the impact of altered precipitation levels, and the impact of altered streams, just to name a few. The case study also uses predictions for the University of Washington to show what could happen to the Puget Sound region in the future if steps are not taken to prevent Global Climate Change. If steps are not taken to prevent this Global Climate change in the future the effects on the salmon and the resources around it could be devestating.

This case is the second of a two-part series that was designed for each part to be completed within a fifty-minute class period. It was designed to raise awareness of the threats to coastal and Puget Sound Tribes that have land adjacent to these bodies of water, and depend on the salmon whose life cycle is so connected with the rivers and streams that flow into Puget Sound and coastal regions. The case is based upon the scientific reality of global climate change, and the topics include the projected impact of climate change on the hydrological cycle in Washington State. These impacts will have a major impact on the salmon life cycle by making the rivers and streams less hospitable to the anadromous fish that have been in this region for thousands of years. The impacts on salmon will have direct effect on coastal and Puget Sound Tribesthat have interacted with salmon for thousands of years. The case is based upon research, field measurements and thinking of many local scientists in various state agencies, and in the University of Washington Climate Impacts Group https://cig.uw.edu/ (accessed May 20, 2011). The conclusions of multiple scientists concur on the following points: (1) temperatures are rising throughout the Pacific Northwest, including stream temperatures, and increased water temperature is potentially fatal to salmonids; (2) winter seasons are apt to see more rain, with less snowfall in the mountains; (3) summer seasons are apt to see a dramatic decline in stream and river flow because of decreased summer precipitation, and decreased snowpack in the mountains; (4) flooding and scouring in streams during the winter season is likely to increase, with potential major impact on salmon redds; (5) the alteration of the existing hydrological cycle will affect salmon, agriculture, hydropower generation, and drinking water availability throughout the region. The need for Tribes to be paying attention to the potential impact of global climate change on salmon is obvious.

Intended Audience: This case is intended for lower division college undergraduate students. It is suitable for almost any class that is looking for an introduction to climate change impacts on some of the Tribes in Washington State.

This case was also designed as a 'clicker' case , to be used in conjunction with an interrupted-lecture format, or an interrupted-workshop format. The clickers allow students to select responses from an array presented them, and to electronically record their responses. The clicker software allows the instructor to immediate feedback regarding student understanding of the array of questions the instructor poses for the students, or to have students participate in a decision-making process, or to have the students vote on some issue. The aggregated student responses are useful measures of student understanding or sentiment, and enable the instructor to adapt presentation content to the topics about which the students may be exhibiting some confusion. This case has clicker questions scattered throughout the case as material is presented, and again as a concluding set of questions. This affords the instructor the opportunity to assess the "before-and-after" levels of understanding each student had.

My intent in this case was to make students aware that global climate change is already having an effect on the hydrology of the Pacific Northwest. The alteration of the existing hydrology will have serious consequences for salmon (to say nothing of agriculture, hydropower generation, and drinking water availability). Rising air and water temperatures, increased winter rains with attendant scouring and flooding of streambeds, decreased summer stream flows coupled with rising air and water temperatures all spell trouble for salmon and the salmon life cycle.

This case presumes the students have a minimal awareness of the salmon life cycle, but the case affords a superb opportunity to study in more depth the effects of stream hydrology on the well-being of salmonids. Excellent resources on the salmon life-cycle are the books by Bell and by Quinn listed in the Reference section below.

Related Cases. There are numerous related cases in our collection to use along with this case on climate change. There is a series of cases we call our salmon series.

The Salmon Series includes Ancestral Roots and Changing Landscapes: The Impact of Seattle's Development on the Salish People of Central Puget Sound ; Native Fishing Practices and Dissolved Oxygen in Hood Canal ; River Flow for Riparian Health ; Co-Management of Puget Sound Salmon ; Salmon contamination on the Columbia River ; Salmon Habitat: The Culvert Case and the Power of Treaties ; The Restoration of the Elwha River: Tribal Rights and the Role of Cost-Benefit Analysis; Cole Impacts of Global Climate Change on Tribes in Washington: Part 1 Sea-Level Rise & Part 2 Impacts on Salmon.

Each of these cases has a rich array of resources and references that are very suitable for further student investigation, or student research projects.

Excellent documents regarding climate change in general, and the potential effects on the hydrology of streams and rivers in Washington in particular, can be found at the website of the Climate Impacts Group at the University of Washington http://cses.washington.edu/cig/ (accessed May 20, 2011). Information, research results, and data bases are constantly changing, and this site, along with the IPCC site (IPCC 2007, below) are among the most credible. Other excellent groups that have working groups dealing with climate change and/or salmon are:

Two excellent books describing many features of the salmon life cycle are Bell 1996 and Quinn 2005, both listed below.

Assessment is at the discretion of the educator and how this resource is applied. Discussion questions are included.

Excellent documents regarding climate change in general, and the potential effects on the hydrology of streams and rivers in Washington in particular, can be found at the website of the Climate Impacts Group at the University of Washington http://cses.washington.edu/cig/ (accessed May 20, 2011). Information, research results, and data bases are constantly changing, and this site, along with the IPCC site (IPCC 2007, below) are among the most credible. The website of the northwest Indian Fisheries Commission, http://nwifc.org/ , is excellent. Also listed are two very fine books describing many features of the salmon life cycle.

The following websites contain a wealth of information regarding Tribal actions to improve salmon habitat: