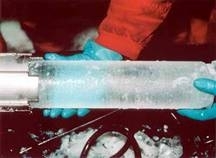 Provenance: Eli Bacher-Chong
Reuse: This item is offered under a Creative Commons Attribution-NonCommercial-ShareAlike license http://creativecommons.org/licenses/by-nc-sa/3.0/ You may reuse this item for non-commercial purposes as long as you provide attribution and offer any derivative works under a similar license.

In this lab, students learn how to use data from the Vostok ice core to measure and compare temperature between different temporal periods. Ice core samples contain several climate indicators: the amount of dust in each layer from volcanic debris, airborne continental dust and biological material, and cosmic particles; all the aforementioned mix with snow and act as a barrier between different ice layers. The composition of bubbles of air trapped in the ice is a measure of the makeup of the atmosphere in ancient times. The isotopic composition of water, and in particular, the heavy isotope of oxygen, as well as deuterium, is indicative of the temperatures in the environment. Understanding the historic and contemporary content of ice core samples enables scientists to make accurate predictions regarding the Earth's climate future.

Students will learn the following: - To become familiar with ice core data - To explore the implications of ice core data on the Earth's past, present, and future climate - To form predictions regarding the Earth's climate.

The format suggested for this lesson is a lab. Since it requires no laboratory equipment, the class size can range from a small student seminar to a medium sized lecture hall. The only mitigating factor related to class size is the necessity for each student (or perhaps pairs if the instructor elects to make the lab report a paired activity) to have a computer terminal or laptop with Internet access. The class does not need to have a SmartBoard or LCD projector, since the lab work will be conducted at individual computers, but access to multimedia equipment is preferred. See "Description and Teaching Materials" below for link to the source lab.

A review of each of the lab components should provide sufficient preparation for the lab; in particular, the Michigan lab contains helpful context for the purpose and utility of the lab (and could serve to add further depth to Columbia's introductory PowerPoint.

The Vostok core was drilled in East Antarctica, at the Soviet station Vostok from an altitude of 3488 m, and has a total length of 2083 m. Ice samples have been analyzed with respect to isotopic content in 2H, dust, and methane and carbon dioxide trapped in air bubbles. The profiles of 2H, methane, and carbon dioxide concentrations behave in a similar way with respect to depth in the core, showing a short interglacial stage, the Holocene, at the top, a long glacial stage below, and the last interglacial stage near the bottom of the core. The record goes back in time about 160,000 years. (In January 1998, the collaborative ice-drilling project at the Russian Vostok station reaching a depth of 3,623 m. Preliminary data indicate the Vostok ice-core record extends through four climate cycles, with ice slightly older than 400 kyr (Petit et al. 1997, 1999). but for this lab, we will analyze the 160ky data as an exercise.)

The following lab consists of four sections and 10 separate tasks.

A. Gas Age versus Ice Age

Age is calculated in two different ways within an ice core. The ice age is calculated from an analysis of annual layers in the top part of the core, and using an ice flow model for the bottom part. The gas age data accounts for the fact that gas is only trapped in the ice at a depth well below the surface where the pores close up.

Task 1: Open the Vostok ice core Excel file from courseworks. Plot both the ice age and the gas age as a function of depth on the same graph. Describe the graph and answer the following questions:

B. Delta-Deuterium (δD) As A Proxy For Temperature

*Be sure to save your temperatures for plotting

· List sources of uncertainty for this paleoclimate record (Hint: think about some of the uncertainties in the age models and compare the age of the Last Glacial Maximum to what scientists consider the age to be today.)

· How long ago did the maximum temperature occur (last interglacial)?

· How long ago did the minimum temperature occur(last glacial maximum)?

· How do these temperature compare to the current average Vostok temperature? (Note: you will need to compute an average of the temperatures given on this site (24h average temperature).)

Task 4: Plot CO2 as a function of gas age. How closely does the plot of CO2 resemble that of temperature? Now plot CO2 (x axis) against temperature (y axis). Add a trendline and record the R2 value. Based on your work in previous labs, do you think this correlation is significant?

Task 5: Make the same plots for CH4.(CH4 vs gas age, CH4 (x axis) vs temperature (y axis), Add a trendline and record the R2 value ). Is CO2or CH4more closely correlated with temperature? Why do you think that is? Now make a plot of dust as a function of ice age. Compare this to the temperature vs ice age plot. And plot the dust against temperature. How well do the changes in dust concentration correlate with the temperature changes?

Task 7: Insert today's CO2 concentration (use the IPCC value given above) into the linear regression equation from question #4 to determine what the past relationship between CO2 and temperature predicts that today's temperature should be at Vostok. How does your calculation compare with the known value?

You can calculate the rate of change of temperature (degrees/ka) by subtracting one temperature from the next oldest and dividing by the ice-age difference. That is:

Task 8: Calculate the warming rate for the entire time series and plot warming rate vs. ice age. What is the most rapid warming that occurred during the deglaciation that began around 15,000-20,000 years ago? How do the rates of warming that you've calculated compare with the current warming characterized in the 2007 assessment report from the IPCC (see link to the report and estimate a value from the graph (degC/year))?

Task 9: Now calculate the rate of change in greenhouse gas concentrations (CO2 and CH4) versus gas age for this time period. How do these rates of change compare with the changes in carbon dioxide and methane concentrations that have occurred over the past 100 years (see the link to the 2007 assessment report of the IPCC)?

Task 10: Note that there were two major warming events representing two deglaciations in the Vostok calculated temperature data. Then plot (since last 30 kyr) and look at how CO2 and CH4 change during last deglaciation period. From the data provided in this lab, can you tell which changes first, temperature or greenhouse gas (CO2, CH4) concentrations?

Note: in case you want to plot secondary y axis:

1. Why do ice age and gas age change with depth in the core? Why does the thickness of annual layers change?

2. Why were CO2, CH4, and dust concentrations different during the glacial time as compared to the 18th century?

3. How did conditions during the last glacial maximum (around 20,000 years ago) differ from today's conditions?

4. How do the glacial/interglacial changes in temperature, carbon dioxide, and methane compare to the changes since the 18th century?

Below are the links for source material and resources:

· Computer lab or moveable laptops with Internet access and Excel.

· "Writing a Lab Report" (may have already been disseminated)

Vostok Ice Core
The Word version of the lab
6_CM_VostokIce.doc

Background Information for instructors/TAs: Instructors/TAs may find it useful to refer to the summaries of each of the labs referenced above. Also, it's important that instructors/TAs have at least intermediate Excel skills in order to facilitate the plotting of graphs.

Students summarize their findings in a lab report.